On January of 2002, Amchem completed a landmark project for NTPC / NBCC at their 2×500 Megawatt Simhadri Thermal Power Project near Visakhapatnam. We coated more than 650,000 sq. feet of Concrete Cooling Tower with 2,000 microns Purethane® Coatings (NDCT-1). This ‘first of a kind’ project was technologically and logistically quite challenging. The Natural Draught Cooling Towers (NDCT) at Simhadri are some of the largest in the world with a height of 165.45 m. Each tower has 32,000 cubic metres of concrete and 4,700 MT of reinforcing steel. Along with that, approximately 60,000 m³ / hour (60 million litres/hour) of seawater at 1.5 cycles of concentration flows through the towers. 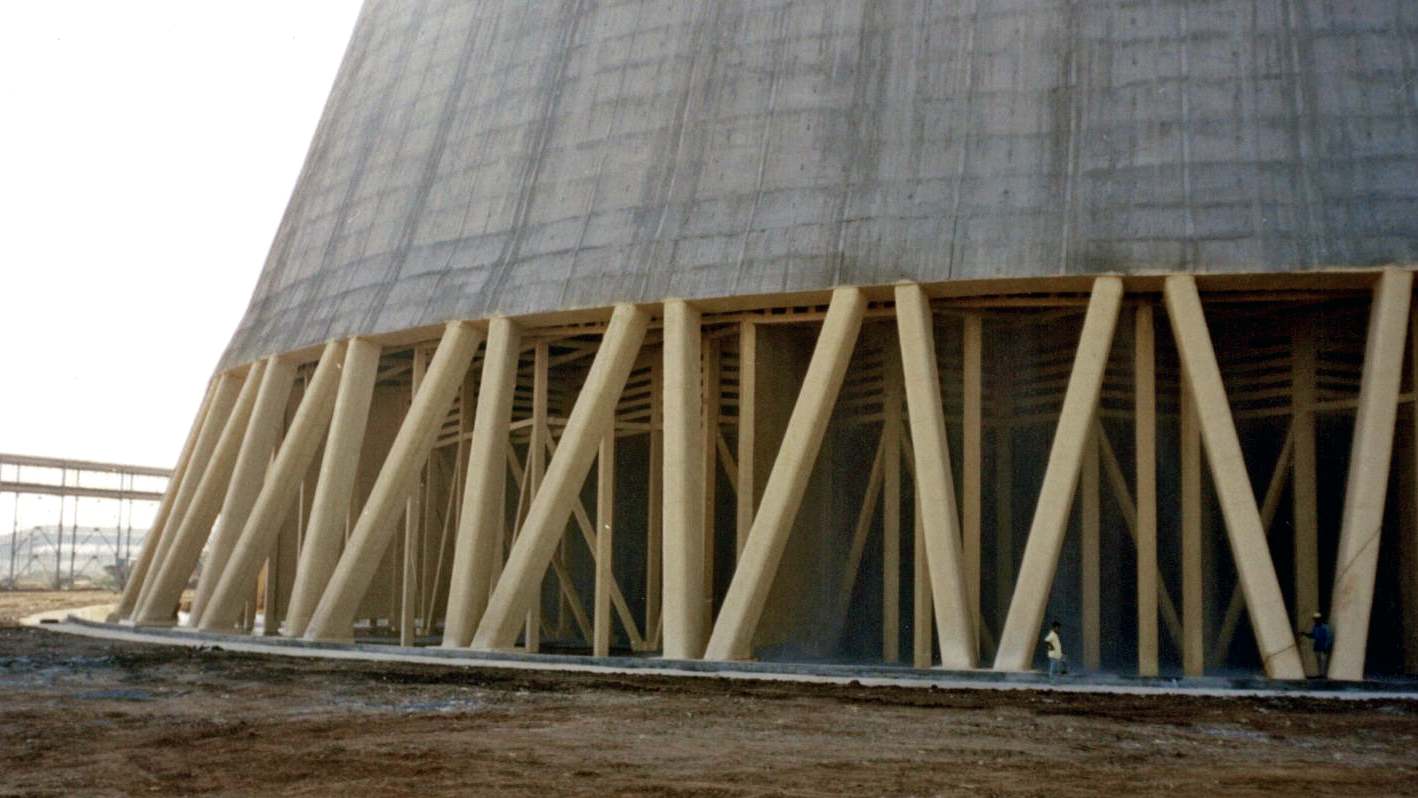 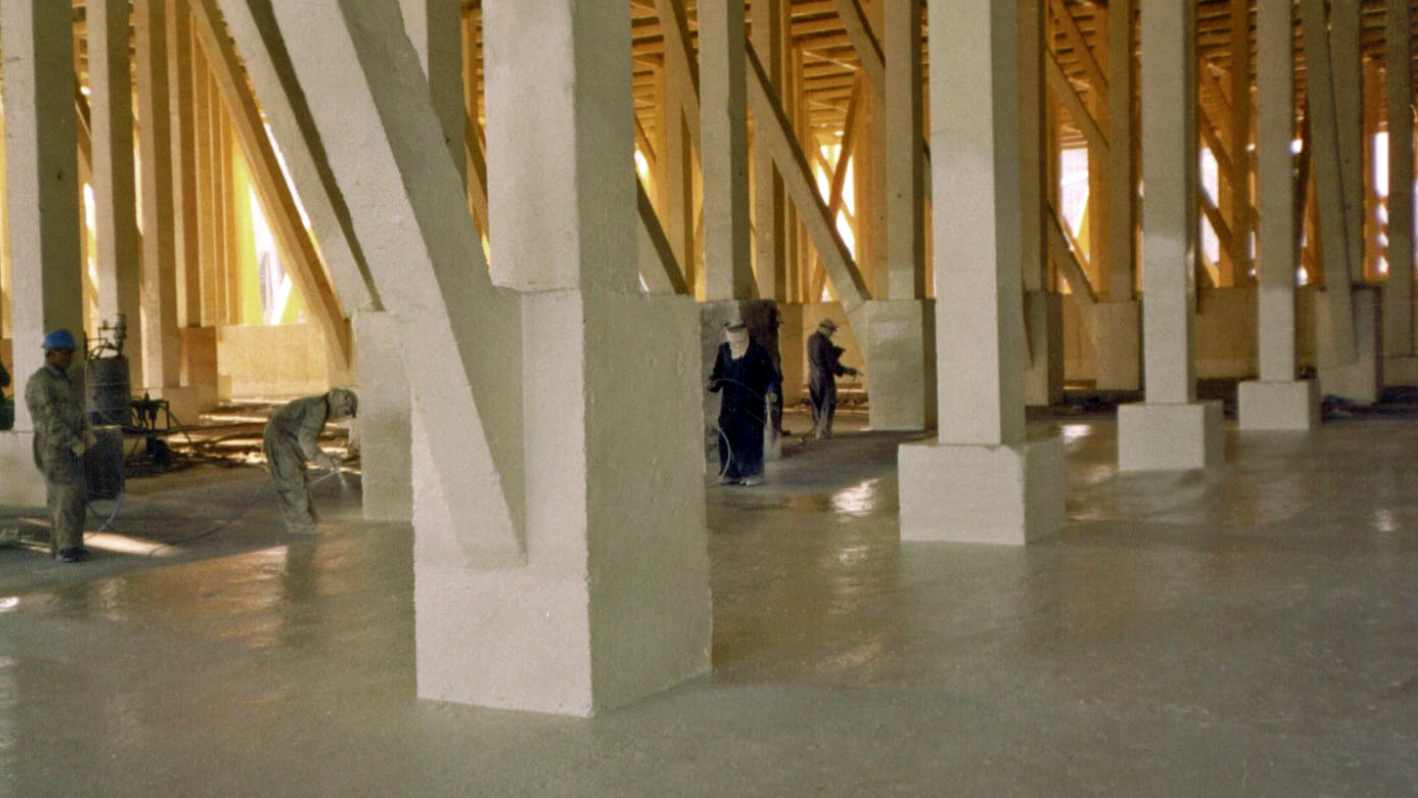 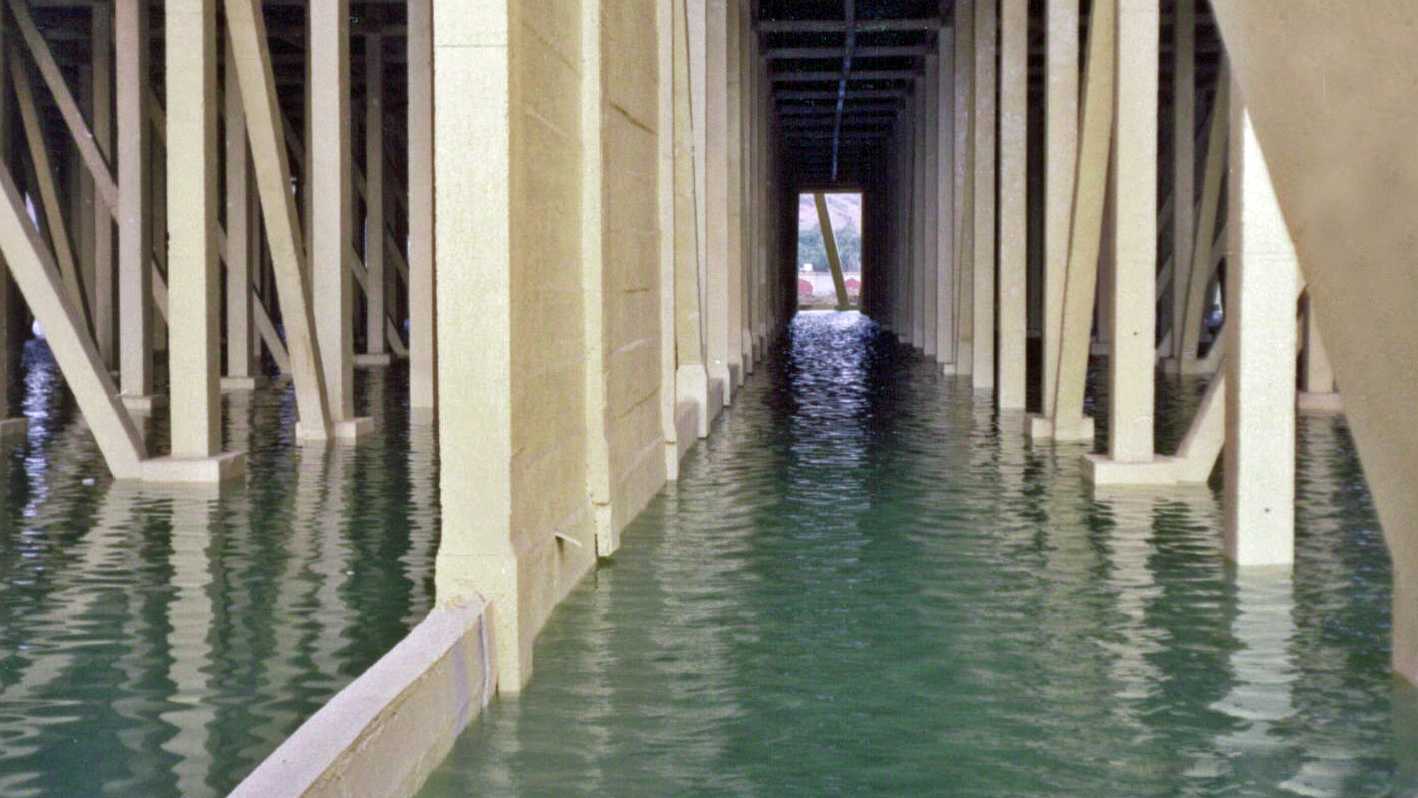 To prevent concrete degradation and rebar corrosion in this highly corrosive seawater immersion & splash environment, a number of measures were taken in the design. Principally, all concrete and steel surfaces in contact with sea water & sea water spray i.e. up to drift eliminator level (15 m) were coated with 2.00 mm of Purethane® — 100% Solids High Build Polyurethane Coating. These polyurethane coating provided a strongly bonded, tough, impermeable membrane, which prevented transmission of Chlorides, Sulphates and greatly retarded transmission of Oxygen and Water Vapour into the concrete and underlying reinforcing steel. Additional corrosion protection measures taken include the use of Sulphate Resistant Cement with 5-8% C3A content & Marine Grade CRS. Above the drift eliminator (coating line), the shell structure used an organic migratory corrosion inhibitor (MCI).

The MCI did not prove effective in service with future design calling for coating on the entire internal shell wall. This will also prevent water percolating from the shell wall matrix into the racker columns from behind the coating. The internal structure to be coated was very complex. It included the fill support structures, racker columns, baffle walls, duct, walkways, pond floors, pond walls, etc. At heights up to 15 metres (50 feet), the fill support structure was a maze of vertical lower columns (more than 400 in number), upper columns (more than 800), and diagonal columns & beams (around 3,000+). The entire structure was blast cleaned, primed using Purethane® PIV, 100% Solids Damp Tolerant Polyurethane Primer and coated in situ. In order to access the various parts of the structure Amchem deployed specialised high reach equipment such as articulating booms, scissor lifts, manlift etc. The constrained spaces made access to the surface quite difficult but the high reach equipment served the purpose admirably. Three plural component airless spray equipment from Graco Inc., USA were used for the coating. In addition several blast pots and air compressors were deployed for surface preparation. The Graco equipment performed reliably as always with minimal repairs and downtime. A highly skilled crew of around 45 people conducted the surface preparation and coating application.

More than 8,000 litres of Purethane® IV, 100% Solids Damp Tolerant Polyurethane Primer and more than 135,000 Litres of Purethane® , 100% Solids Polyurethane Coating were used for the coating operations. Purethane® PIV is a specialized primer which penetrates into the concrete, sealing and consolidating the surface for improved adhesion. Water tolerance allows it to be sprayed onto damp concrete with excellent bond between the primer and concrete as well as primer and coating. We also conducted regular field tests to measure properties such as hardness, film thickness, coating adhesion, etc. with the tests meeting 100% of the specified requirements throughout. Samples were also drawn and sent to the Indian Institute of Chemical Technology (CSIR), Hyderabad for testing coating parameters such as tensile strength, recoverable elongation, water vapour transmission, flexibility, impact and abrasion Resistance with 100% of tests far exceeding the specified parameters.

Water from the condenser is brought into the Cooling Tower through 3.2m diameter MS Pipe up to Cooling Tower bottom, which is bifurcated into 2 pipes of 2.4m rising up to a 15 metre level. They enter the cooling tower and discharge hot water into RCC hot water ducts in each half. The hot water is further distributed through secondary ducts from each main duct and AC pipe network. Afterwards the water is sprayed downwards from the AC pipes through PVC fills where incoming air from gaps in the racker column cools the water, and collects in the basin. We coated the pond walls and floors last after the fill support structure was completed. NTPC’s Simadhri Thermal Power Plant project was logistically and technically challenging, however Amchem received great praise and our performance and coating was highly acclaimed by NTPC/NBCC. 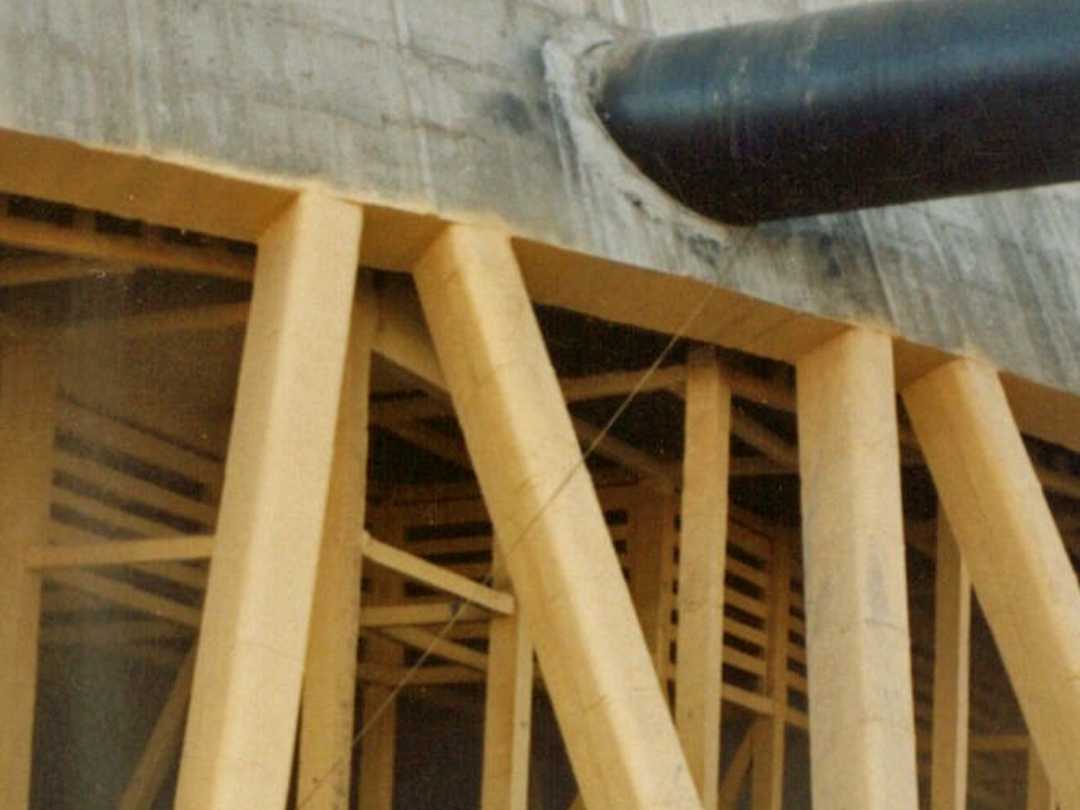 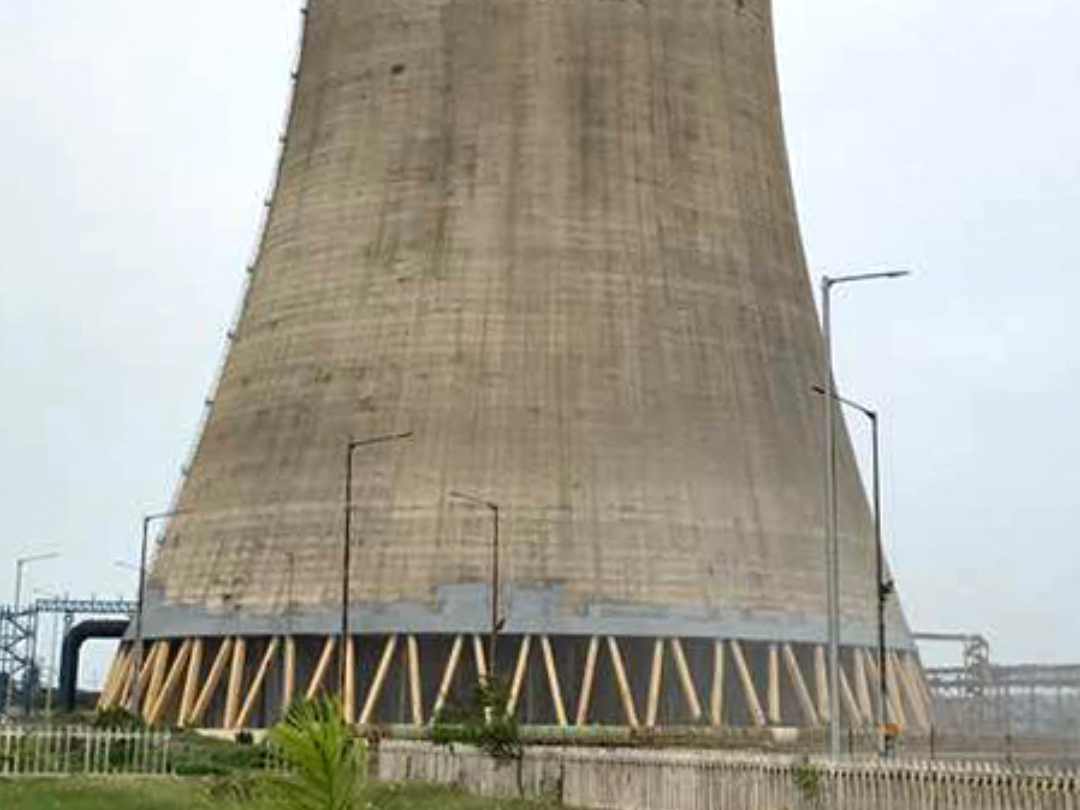 As part of the long term performance review exercise, Amchem personnel visited the plant in the end of June 2017, after more than 15 years of operation. In retrospect, we had a few insights:

A comparison of the areas protected by our polyurethane coatings and the areas without it demonstrates the efficacy, quality, and protection provided by Purethane. It would be safe to say that without our coating, the Cooling Tower would not be standing today.