In December of 2000, Amchem successfully completed a project for external coating of approximately 5 kms of 24″ diameter and 16″ diameter Pipeline for Bharat Petroleum Corp. Ltd (BPCL) through Expo Gas Containers Ltd at site in Haldia using our 100% Solids Polyurethane Coatings – Purethane®. The first-of-its-kind project involved blast cleaning of individual pipe sections using Granulated Copper Slag to SSPC SP-10 Near White Finish and coating with 1000 microns of Purethane®. Amchem made extensive use of automation for the project to ensure the high quality and output we strive for in each and every one of our projects. 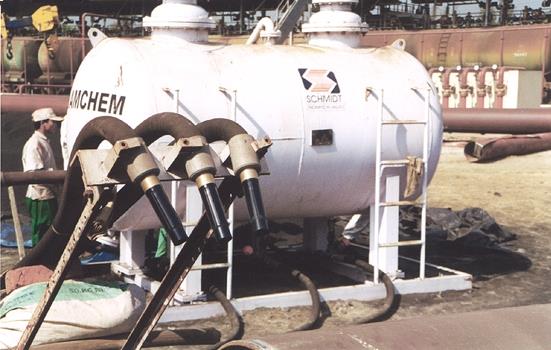 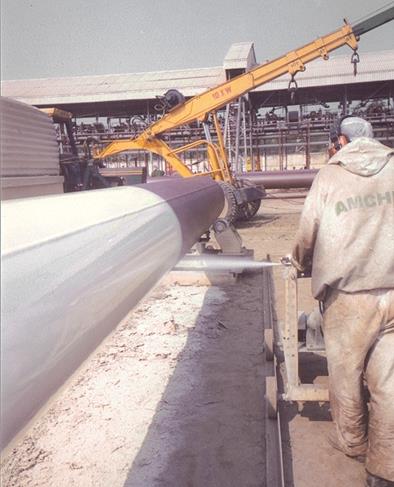 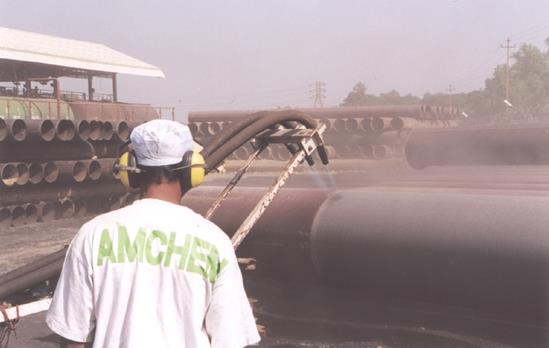 A 10 MT, multiple nozzle, Bulk Blasting pot with highly acclaimed Schmidt Thompson valves and controls were deployed for the job – a milestone for the entire industry in India! Along with that, 3 No’s X 11 mm Polyurethane – TC nozzles were used for simultaneous blasting. A surface profile of 100 microns+ (Range 100-130) was obtained against the 50-75 specified. Blasting output at 80-90 sq. metres/hour was 60% faster than manual blasting using similar sized nozzles! Blast cleaning obtained was very even and approximated a clean white finish. High precision variable speed drives controlled the pipe spinning and nozzle travel rates. 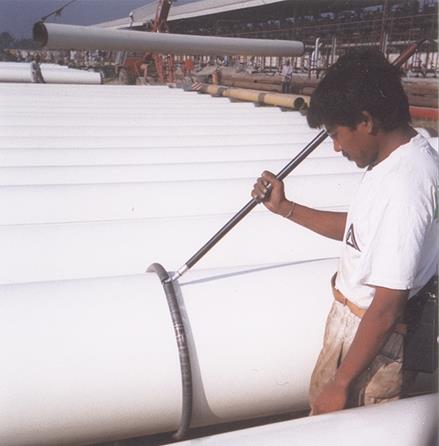 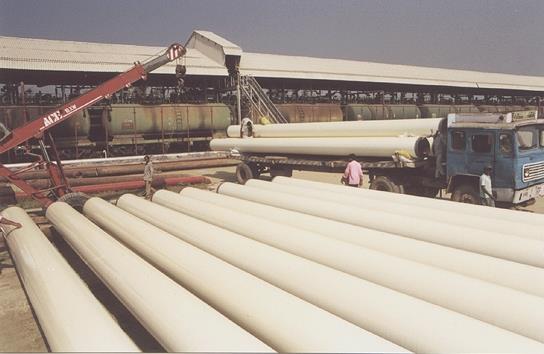 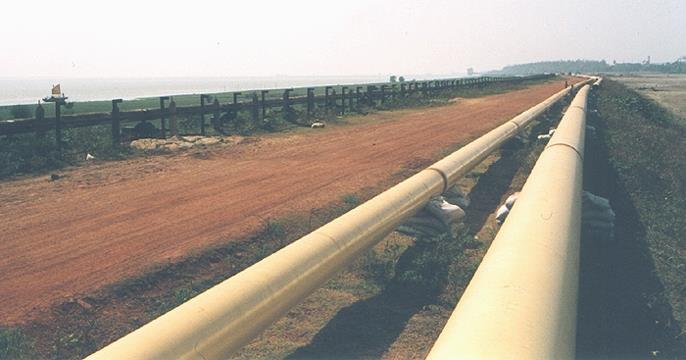 The pipes were coated on similar automated pipe beds using Graco Hydra-Cat (USA) airless spray equipment. The coating speed was approximately 140 sq. metres/hour which translates to an estimated 10 minutes per pipe. The coating turned out very evenly with a thickness of 42-44 Mils (1050 to 1100 microns) against the 40 Mil (1000 microns) that was specified. 100mm wide areas were left on the pipe ends for pipe girth welds at the installation site. A holiday free coating was provided with holiday testing (at 6000 V) conducted at a regular basis. After a short, around one or two days, curing period, the coated pipes were transported to installation site an estimated 2km away.

The operation of a mobile “pipe coating plant” near the installation site resulted in huge savings in transport and handling costs. Purethane has outstanding resistance to impact and abrasion damage and suffers no damage during handling. Purethane coating was manually sprayed on the girth welds areas after blast cleaning. Compared to conventional joint coatings such as shrink sleeves, this method has a very fast operation speed with a capacity of over several hundred joints possible in a day. The joint coating is a continuation of the pipe coating with no discernable discontinuity between the morphology of the two as molecules of each link into a homogenous barrier affording equally strong protection over the field weld as well as over the pipe. The pipe was installed in adjacent marshy area.

Due to its excellent Volume Resistivity of more than 4.0 x 10¹⁴ Ohms/cm, Purethane requires the lowest current density for achieving protective potentials – thereby allowing large savings in cathodic protection costs. Purethane enables you to have the assurance of a high quality and performant coating while saving money at the same time! Purethane is the ideal “on-site” coating for new pipelines as well as for rehabilitation of existing ones.